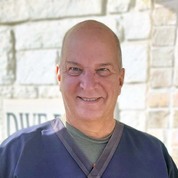 Dr. Fuller received his undergraduate degree from U.S. Military Academy at West Point in 1977. He served for five years in Germany, then left the military to pursue dental school. He graduated from the University of the Pacific School of Dentistry in San Francisco in 1985 and returned to the military in the Army Dental Corps. While there, he completed his Advanced Education in General Dentistry two year residency at Fort Hood, Texas in 1992. While in the Army Dental Corp and Army Special Forces, Dr. Fuller had the opportunity to travel to Korea, Honduras, and Kenya to treat patients.

After leaving the military in 1993 he went into private practice in Bonney Lake, Washington and was there for nine years. In 2001, he relocated to Denton where he opened DWF Dental.

Dr. Fuller lives in Denton, TX and is an active member of the local Elks lodge and Denton Bible Church. He enjoys spending free time with his wife Laura, their combined families and his five grandchildren.

Meet Our Other Doctor

At Denton Dental Group, we work as a team to provide the best possible experience in dental healthcare.